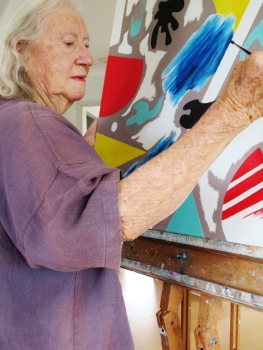 These works from the Composition series made up Daphne’s exhibition in Ponsonby, in April 2016, entitled “I heard 1000 blended notes” (1.)

The highly structured works that made up this exhibition are largely part of a series begun by Daphne Mason in 2013, simply named: Compositions. Evoking memories of places and relationships, these are inner landscapes altered by words and events, depicted in the use of symbols drawn from Daphne’s life.

Growing up without siblings in the 1920’s and 30’s, Daphne lived with her widowed mother in boarding houses or rented rooms. After school, while her mother was still at work, Daphne was left to entertain herself, and often turned to puzzles. These were pictures containing a number of hidden objects that had to be found.

This way of looking at complex images and situations soon became a lens through which to view life. It not only transformed densely patterned floral wallpaper into substitute puzzle books, but also provided a structure with which to make sense of boarding house conversations. Half-finished sentences and allusions aimed just over her young head left Daphne with even more puzzles to solve. What developed from these years was a fascination with people-watching and pictorial fragments, and the way in which a half-finished sentence could be so redolent with meaning. The resultant works are in effect puzzles Daphne sets for herself, and the viewer.

These works demonstrate the excitement Daphne feels when painting, despite the approach of her 88th birthday. Still at her easel most days, Daphne’s current works distil a lifetime of observation, as well as reflecting the structure and rigour of the classical music she so often painted to. Like a sonata, Daphne’s work spans both themes and variations in works like Composition #1 and #13, before erupting into the gloriously joyous recapitulations and coda of Compositions #35 and #46.

THE ONLINE BIO AND PORTFOLIO OF DAPHNE MASON (Contact Daphne's Agent: Janet Mathewson currently via mathewson_22@hotmail.com or +64 2108303420 for a more extensive range of Daphne's work)